After 12 months or more of preparation, the big day came when we would finally go to work. Well, I suppose, that's what we are here for but it was still a shock and very exciting at the same time. 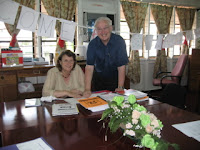 We decided to take a taxi, Mary Stephen and Meg ($260 - 70p) for the first day but after that it would be walking or bicycles. We were there in 5 minutes and quite early so we sat in reception. We were met by our line manager, who showed us to our office. After a while we were given folders with the plan for our induction which lasts about five weeks. An hour later we were given a tour of the place. We work in NCERD - National Centre for Educational Research Development. It deals for all INSET, Curriculum and Assessment needs for the whole of Guyana. Mary will be working with others on Literacy and Stephen will be reviewing and updating the National Management Certificate - the Guyanese equivalent of NPQH. It's a bit like the Guyanese QCA. 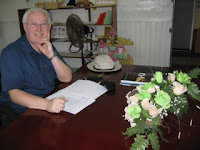 The building is about the size of a small secondary school but has many departments - more about that later. We are working in the Curriculum Department where all the curriculum is designed, mainly numeracy and literacy. Maths is taught to the whole country at the same time via radio and they have their own studios there. It is quite a job to get the radio programmes out on time and produce and distribute all of the supporting materials for teachers.

Our second day, we were given the day off because we were moving into our houses, although a little late. It was very helpful and allowed us to get straight. On the third day, we met with the Director who gave us an overview of NCERD and the Ministry of Education and the educational system in general. He told us where we would fit in. 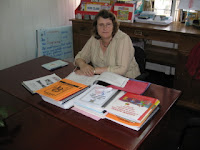 For the rest of the day we were left to our own devices and so read up on various documents. We finish at 3-30 on Fridays to allow us to do some shopping. Our normal working hours are 8.00am until 4.30pm with an hour for lunch. There is a snack bar on site. We have 6 weeks paid holiday and there are 15 Bank Holidays on top. We already had one of them on Mashramani Day and we have another on Monday (today) which is a Hindu Thanksgiving Day for the Harvest (Phagwah Day) when everyone throws water and paint at you.

More on the House Move later. 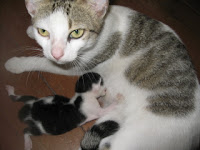 The NCERD cat has just had a kitten 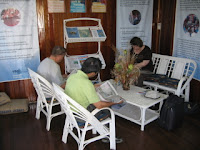 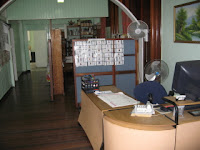 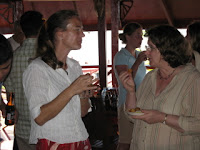 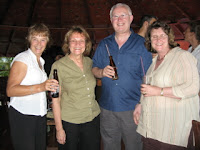 Drinks at the reception in Celinas

How to navigate this blog

All the latest articles are on the left hand side but there are hundreds more. Just scroll down this right hand sidebar and firstly you will find the latest news updates and then below them are all the blog entries in date order from before we left in 2007 as well as blogs and favourite sites from other volunteers. Happy reading!

Welcome to "Stephen and Mary @ Guyana"

We travelled to Georgetown, Guyana in February 2007 and were there until February 2009 - two years in all. Hope you enjoy reading about our adventures!

We were Volunteers for VSO International from England. All views expressed in this blog our our own and do not represent the position of VSO. Enjoy reading and contact us if you wish!

To read about the lastest news, just scroll down this sidebar.

In the four years since I started writing this blog about our adventures with VSO in Guyana, the site has received over 10,000 hits. It's now time to stop the counting as we have returned. 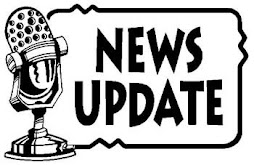 It's 7th September 2010 and we've been offered a one year placement in Rwanda starting in January 2011. It's not finalised yet so we're hoping for the best. It's a French speaking country which has just changed its language of instruction to English.

It's 29th July 2010 and we have just been told that we have been assessed and accepted for out next VSO placements.

It's 8th May 2009 and we go to Harborne Hall, Birmingham for three days for the Return Volunteers Weekend.

It's 25th April 2009 and we visit Ann in Elesmere Port. (NCERD colleague and VSO)

It's 22nd April 2009 and we have journeyed "up North" to visit our NCERD colleague, Meg in Southport

It's 7th March 2009 and Ann throws us a party with family and friends to welcome us home.

It's 2nd March 2009 and we arrive home early in the morning to be greeted by Dan, Matt and Ann.

It's 1st March 2009 and we fly from Las Vegas to Los Angeles and the overnight by New Zealand Airways to London Gatwick.

It's 22nd February 2009 and we have been in New York for nine days and will go to Las Vegas tomorrow. Just look at the main posts for a report.

It's 12th February 2009 and we spend our last night in Guyana with the "13th Club" (the day we arrived and meet every month) at Nicolette and Martin's house.

It's 10th February 2009 and we go to the New Thriving restaurant with Nicholas and Jenelle, Jane and Meg

It's 9th February 2009 and we go to the Brazilian restaurant for one last meat feast with Mira and michaela and her Mum who is visiting.

It's 30th January 2009 and Mary starts to feel normal again too.

It's 27th January 2009 and I'm starting to feel normal again

It's 16th January 2009 and Mary and I are struck down with a debilitating virus which is to last over a week.

It's 3rd January 2009 and we return to Guyana for the last five weeks of work before completing our placement.

Thanks to everyone who keeps in touch and don't forget to leave a comment when you visit the site.

It would be good to have a two way process and let me know who you are by making a comment. It's easy. Just click below the article and you can comment and I'll know where you are from.

Do you want to know more about Guyana? 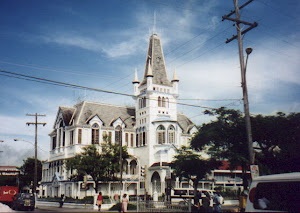 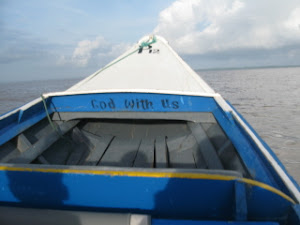 How to get wet in 30 seconds

Why not try these? 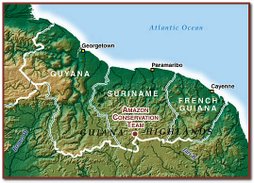 We lived in Georgetown - the capital